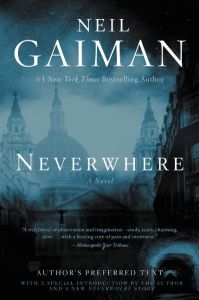 Neverwhere is a 1996 urban fantasy novel by Neil Gaiman, written as a companion to the BBC television series he wrote with Lenny Henry. The book expands and restores elements of the show that were changed or taken out during the course of the show.

Though I haven’t seen the TV show, I enjoyed the book. After reading a few heavy, theme-laden books (The Power, Who Fears Death), it was kind of a relief to read something a bit lighter, something equivalent to a beach read, for me.

Richard Mayhew is a young man who lives in London, has a decent job in business, and is engaged to a beautiful woman named Jessica. The problem is, his job is a bit of a bore, Jessica is a controlling witch, and Richard doesn’t have the back bone to stand up for himself to change anything.

One night, on the way to a dinner with Jessica’s boss, they stumble upon a bleeding girl in a doorway. Jessica is content to ignore her and get to the dinner, but Richard decides to help her. Jessica leaves in a huff while he takes the girl to his apartment. The girl (perhaps late teenager, though it’s hard for Richard to tell), when she wakes, tells him her name is Door, and needs his help. They’re visited by a strange and menacing pair, named Mr. Croup and Mr. Vandemar, and it’s clear they mean no good, but Door manages to hide from them. Door herself is no less strange, with opal-colored eyes and the ability to speak to rats. She sends Richard on an errand, to find an even stranger person, a Marquis de Carabas, who owes her family a favor. Richard brings de Carabas back to his apartment, and he and Door leave, thanking him for his help.

However, Richard is unable to go back to his normal life after this. It seems no one is able to see him anymore. When he manages to get someone’s attention, they don’t seem to know him, and then they immediately forget him, as if he’s invisible. He can’t go back to his job, and Jessica, who’s broken their engagement for missing the dinner with her boss, doesn’t recognize him. Strangers even move into his apartment while he’s still there. Ever since his encounter with the strangers, his staid, predictable life is lost to him.

Determined to get his life back, he retraces his steps, and finds himself in “London Below”, a shadow world beneath the streets of London Above. A world of tunnels and twisting alleyways, of stairways and dark bridges and phantom train stations, filled with colorful characters who can speak to rats (animals who are naturally important members of the world below), Velvet Sisters who can suck the warmth and life right out of you, assassins and Earls, Hunters and Beasts, Sewer Folk and Angels.

Richard eventually finds Door, and he becomes embroiled in helping her find the answers to who killed her family and why. Along the way, he hopes to find a way back to his life in London Above, but not before his courage and strength are tested in a way that changes him forever.

This was a fun read, full of fantasy adventure and some quirky British humor. I hadn’t read any Neil Gaiman before this, but I’d seen the movie Stardust some years ago (based on his book) and enjoyed it, and now I’m thinking I’d like to explore more of his work. Any suggestions?

I'm a writer, blogger, mom, wife--not necessarily in that order! I write mostly paranormal and speculative fiction. I live in Massachusetts with my husband Jeremy and 7 year old daughter Lilly. View all posts by Tina Williams