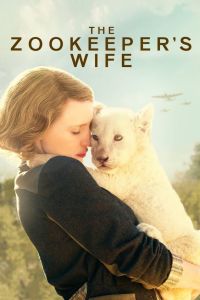 Based on Diane Ackerman’s book of the same name, The Zookeeper’s Wife (2017, directed by Niki Caro) recounts the true story of Antonina and Jan Zabinski, keepers of the Warsaw Zoo during World War II.

The zoo flourishes under the care of Antonina (Jessica Chastain) and her husband, Dr. Jan Zabinski (Johan Heldenberg) . But in 1939, Poland is invaded by the Nazis, and the zoo is nearly destroyed by bombs. The zoo falls under the control of Hitler’s chief zoologist, Lutz Heck (Daniel Bruhl), a former acquaintance of the Zabinskis. With his permission, they transform the zoo into a pig farm, under the guise of providing the Nazi soldiers with meat; they also secretly use it to take in and hide Jews from the Warsaw Ghetto. By the end of the war, they help nearly 300 people escape the Ghetto and certain death as the trains roll out of Warsaw toward the concentration camps.

With the help of those sympathetic to the cause, Jan drives into the Ghetto to retrieve the garbage to feed the pigs; he smuggles people out under cover of the refuse, risking detection and arrest. He eventually finds a way to get passports for those he hides, and later fights in the Resistance. Antonina must stay at the zoo to care not only for their young son, but the people hidden in the rooms beneath her home, all under the nose of Herr Heck, who frequents the zoo to conduct his breeding program to bring back the extinct German bison, or aurochs (another hare-brained Nazi project to bring back their old glory).

Antonina must diplomatically fend off the advances of Heck, while defending her actions to a jealous Jan, who thinks she doesn’t understand what he’s going through, watching the trains fill with doomed men, women and children. They survive the stresses of virtually being owned by the Nazis, only to have Jan disappear while fighting in the Resistance, shortly after she gives birth to their daughter. Antonina must make a desperate bid to find her husband and save the Jews under her care. 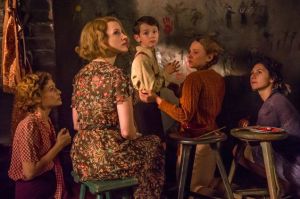 Chastain in luminous as Antonina, communicating both her vulnerability and her strength, and the supporting cast is superb. There are many wrenching images in the film: the animals of the zoo being shot in cold blood by the Nazis; the shell-shocked face of a girl after being raped by two soldiers, blood running down her inner thighs; Jan’s heartbreak while helping innocent-faced children up into the trains that will bring them to their deaths.

This is a deeply moving film, reminding us of the harrowing experiences of those who lived through the war, and the sacrifices that were made to survive it.

I'm a writer, blogger, mom, wife--not necessarily in that order! I write mostly paranormal and speculative fiction. I live in Massachusetts with my husband Jeremy and 7 year old daughter Lilly. View all posts by Tina Williams